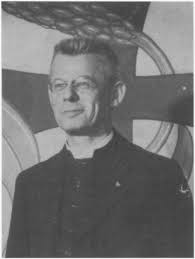 A disciple of Gratry and Ollé-Laprune as well as a student of Victor Brants at the University of Louvain, he learned the Sillon methods while at the seminary, spending two weeks in France in the summer of 1907, studying their approach.

In 1912, he began work in the parish of Notre Dame at Laeken near Brussels where he teamed up with Victoire Cappe and Fernand Tonnet, who had also both previously learned the Sillon methods.

Over the next 20 years, Cardijn and his collaborators worked to refine the method, gradually introducing it into the movement that they were founding.

It is not clear whether it was Cardijn himself who first formulated the expression ‘See Judge Act’, however, he was clearly the leader of the team developing the method.

Addressing the Second Vatican Council in 1965, he said: “I have shown confidence in (young people’s) freedom in order to better educate that freedom. I helped them to see, judge and act by themselves, by undertaking social and cultural action themselves, freely obeying authorities in order to become adult witnesses of Christ and the Gospel, conscious of being responsible for their sisters and brothers in the whole world.”

It is largely thanks to Cardijn that the Catholic Church adopted the See Judge Act method as part of its social teaching, initially in Pope John XXIII’s encyclical Mater et Magistra in 1961 (Paragraph 236).

Vatican II confirmed this, adopting the method in the Decree on the Apostolate of the Laity (Apostolicam Actuositatem) in Paragraph 29. The Council also adopted the See Judge Act as a method of work for the drafting of the Constitution on the Church in the World of