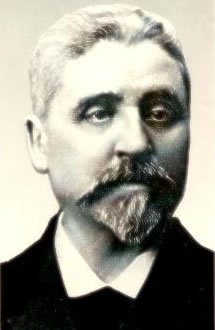 Born in 1839, Léon Ollé-Laprune was a French philosopher who taught at the Ecole Normale Supérieure in Paris.

A disciple of Gratry, he modelled his life on that of Frederic Ozanam to the point that he became known as the ‘second Ozanam’.

He belonged to the Social Reform school of Le Play. Indeed, he lived in the same apartment building (hotel) on Place St Sulpice in Paris.

In 1894, he published his most famous work Le Prix de la Vie, which eventually went through 50 editions by the time of World War II.

He was close to many of the Sillon leaders. Indeed, Ollé-Laprune delivered the valedictory address at Stanislas College in 1893, shortly before the foundation of the Crypt at the College.

The sillonnists later described him as ‘notre philosophe’.